A loooong time ago, I saw an ad for a cigarette lighter drive for a computer. It was only fourteen dollars, but I’d thought it would be more fun to make one myself. Lighters run on 12 volts and I wired in a skull and crossbones lugnut for license plates with glowing blue eyes. The skull’s eyes have since gone dead, but the lighter still works.

Forward to today when I’m building a new PC for myself. When I made the old drive, computers were beige, now they’re black, so I decided to build a new drive ’cause I bought a case with lots of space.

Components are an old DVD drive, black slot cover, cigarette lighter mechanism, and a 15 amp circuit breaker. The lighter’s casing doesn’t get that hot when the lighter heats up, so I didn’t put in any heat sinks. I wired in a SATA power connector from the DVD drive which is more of a pain than a molex. If I made another one, I’d go for molex. 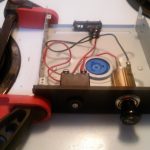 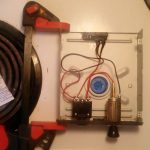 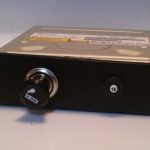 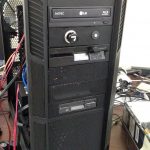 Word of warning, I had a USB accessory charger in my car that went bad. I tried a new one in the car and it didn’t work either. What I should have done at this point is check my car fuse (which was blown), but I decided to test the chargers in my old drive in my PC first. When I put the bad charger in the drive, the PC shut off and went dead. It came back after I unplugged it for a few seconds. I did wire a fuse into the drive, but apparently it doesn’t work well enough. I haven’t tested the new drive’s fuse and I don’t intend to.

This site uses Akismet to reduce spam. Learn how your comment data is processed.